The museum complex consists the main, 2-storey building, with reception area at the rear (left), the blacksmith shop (centre), and the storage barn used for display of exhibits (right).

The Campbell Carriage Factory in Middle Sackville, built in 1838, is one of the best existing examples of a 19th century industrial site in Eastern North America, according to experts from King’s Landing Historical Settlement. For over a century (1838–1949), the Factory was an important part of the local economy and it is significant enough to be designated as both a provincial and a national historic site.

The last record of wages being paid was in 1951. When the last two employees stopped work, the factory was locked up and all its contents left undisturbed. For almost half a century the building with its treasure trove of materials and machinery lay hidden from sight.

It was with great enthusiasm that in 1998 the Board of the Tantramar Heritage Trust took on a major restoration of the carriage factory site focussing on “the horse era of Tantramar.” Some 6000 objects discovered within the building formed the basis for the contents of the museum. Continuing restoration work and further enhancements of the property in 2008 and 2012 have ensured that this historically significant site is preserved for future generations and is available to the public as a museum of unique interest and importance. 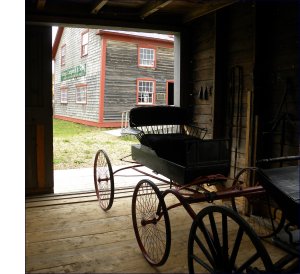 A glimpse of the main building viewed from the storage barn. Exhibits include carriages and sleighs manufactured in the carriage factory over the years.

At the rear of the property stands the monument to the Acadian village of Tintamarre, located in this area.

From Exit 504 on the Trans-Canada Highway take Route 940 north 3 km to Middle Sackville. At Silver Lake turn right on Church Street. At Middle Sackville Baptist Church turn left and the museum is immediately on your right.

How to donate by cheque, charitable donation tax receipts, and more →